We Americans have an impressive habit of taking other countries’ holidays, removing all cultural significance, and replacing it with drinking. St. Patty’s is the obvious example, where the patron Saint of Ireland’s religious contributions are largely overshadowed (at least in NYC) by overflowing rivers of Guinness and Jameson flowing into the mouths of drunken revelers who wouldn’t know Erin if she was going bragh right in front of them.

Cinco de Mayo is another one of these appropriated holidays — take a moment, do you know what it celebrates? I’ll admit I didn’t know it myself until a few years ago, and only because the news was running stories about people’s ignorance. Mexican Independence? Nope, that’s on September 16th (and has an awesome subtitle of “Grito de Dolores” http://en.wikipedia.org/wiki/Grito_de_Dolores). End of the Mexican-American War? No to that as well. In fact, Cinco de Mayo is a commemoration of the Battle of Puebla in 1862, where the Mexican army unexpectedly defeated the much stronger and larger French forces (http://en.wikipedia.org/wiki/Cinco_de_Mayo).

So much like St. Patty’s, for most the holiday has become a celebration of inebriation — Cinco de Drinko, as it is actually advertised. I wish I could say that I celebrated in a more authentic spirit, but although I didn’t have any tequila, I did indulge in another American appropriation of Mexican heritage — gooey, cheesy, meaty nachos. That’s right, in this edition of Brief Bites we’re taking a trip to Nachotown, care of one of the most highly lauded NY spots, Taqueria Diana.

Looking back from the cashier into the long, narrow space of Taqueria Diana.

Taqueria Diana is located right off of St. Mark’s Place on Second Ave, prime feeding grounds for pre-and-post bar-hopping NYU students. My NY dining list contains a disproportionate number of restaurants on St. Mark’s, since the street and surrounding blocks are packed to the brim with eclectic spots, from classics like Mamoun’s Falafel to Khyber Pass (serving Afghani food). In fact, Taqueria Diana is only a few blocks away from another California-Mexican taco spot, Otto’s Tacos, which I hope to cover in another post. 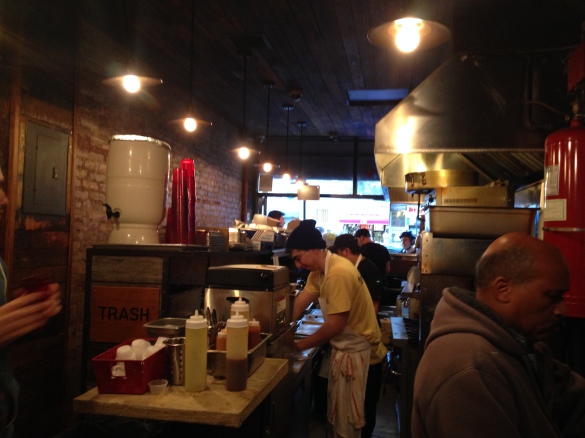 The view from the back of the restaurant, where there are just a few counters with stools. You can see that cooking and prep make up most of the establishment.

I’d imagine real estate is at a premium in this area, so it should come as no shock that Taqueria Diana is only a step up from hole-in-the-wall-sized. Although there are a few bar-height counters and stools at the back of the restaurant, the space is dominated by the cooking/assembly/cashier counter. A small prep kitchen sits in the back. Unfortunately, I had brought 5 friends with me to Taqueria Diana, and we soon discovered that we’d have to take all of our food to go. For cheese-and-sauce heavy dishes like nachos, tacos, and quesadillas, that means cooling and congealing time. I say this having fully enjoyed the dishes I ate, but cautioning that an ideal Taqueria Diana experience should probably be capped at a group of 3.

Between the six of us we basically sampled all the categories on the menu — Jacob and I split the Pollo Nachos, Al Pastor Taco and Rajas Taco, Diana got the Al Pastor Nachos, Michael got a Pollo Burrito, and Dan and Laura split the Asada Nachos and a Pollo Quesadilla Suiza. We missed out on the straight-up Roast Chicken and assorted Sides, but covered all the proteins except for the Carnitas. 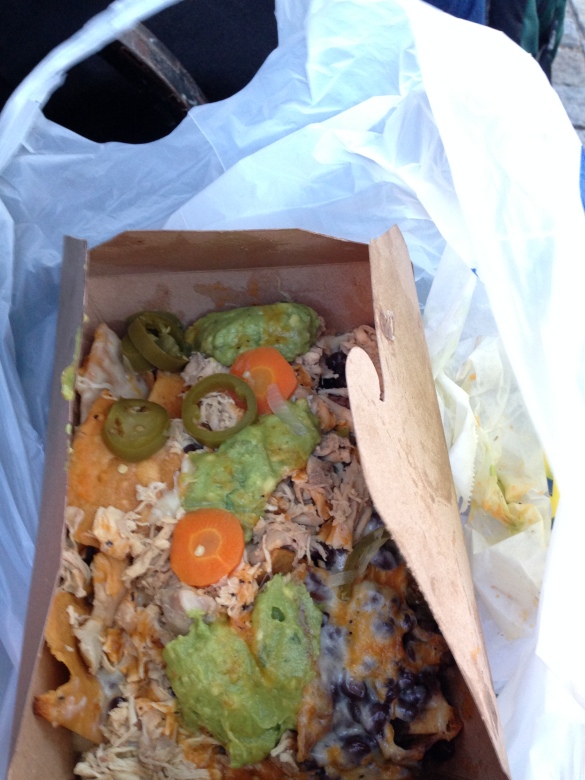 The impressive Pollo Nachos, visually underserved by the takeout container.

You should really look at Yelp for accurate pictures of the nachos, because the depth of the mountain of chips is hidden by their being crammed into a take-out box. Jacob’s and my Pollo Nachos (chicken, chips, black beans, cheese, salsa, with added guacamole) seemed to be an endless, delicious vortex of cheese, guacamole and beans. I was pleasantly surprised by the quantity and quality of the chicken, which I assume is the same meat as offered in the Roast Chicken section. It was mostly sizable hunks of dark meat, juicy and well-seasoned, discernibly more flavorful than your average slices of grilled chicken breast. These nachos were expertly put together, as evinced by the existence of still crispy chips within the pile of semi-liquid condiments. Speaking of which, Taqueria Diana offers a number of salsa and sauces with which to top your dishes, available in unlimited quantities if you can dine in. This adds another layer of customization to the nachos, allowing to select a protein, type of beans, add on crema or guac, and then top with the sauces of your choosing. Unfortunately, our grand plan of dining al fresco in the courtyard by St. Mark’s in the Bowery turned out to be flawed, as a brutal wind kicked up out of nowhere and left us shivering and shoveling Tex-Mex into our mouths. Jacob and I were so desperate to eat our food and get out of the cold that we failed to crack open even one of the sauces we’d thrown into our bag. Yet another reason to come back and dine in at Taqueria Diana. Honestly, though, I was very satisfied by their nachos. The chips were fresh and just slightly salty, the salsa was made of sweet tomatoes, the guacamole was smooth and rich with a strong avocado-forward flavor, and I even made an effort to up my spice tolerance the smallest bit by taking on the jalapenos. The only strange ingredient were rounds of raw carrot, which I can’t say I’ve ever seen on nachos before, and barely made an impact taste or texture-wise.

The sadly soggy Rajas (on the bottom) and Al Pastor Tacos — promising in notion but not made for transit.

Alas, our tacos didn’t hold up nearly as well. They were composed of thin, possibly hand-formed tortillas that soaked through during the transit and nacho-consumption period, literally falling to pieces when first picked up. Of the two fillings, I preferred the Al Pastor Taco (spit-roasted pork, corn tortilla, salsa, onion, cilantro) to the Rajas Taco (Poblanos, Corn tortilla, salsa, onion, cilantro), because most of what I got out of the Rajas was the heat from the peppers (still not too good at that spice thing, I guess). Despite the descriptions on the menu, our tacos seemed to have different toppings, the Rajas getting cotija cheese and sliced radishes, while the Al Pastor had lime and what looks like a squash blossom of some sort. The fact that everything was mushed together and muddled by the take-out box — which proved beneficial to the nachos — here left me tasting only the most prominent elements of the tacos, which ended up mostly being the meat from the Al Pastor. Taqueria Diana does seem to have a gift for proteins, however, since the pork was just as juicy and flavorful as the chicken. Doing a comparison between the regularly cooked carnitas and the spit-roasted al pastor might be another reason to return.

I mean, look how badass that hunk of Al Pastor pork is — worth another shot if eaten straight away.

All in all, I’d fully endorse a visit to Taqueria Diana, and hope everyone takes this as a cautionary tale of how NOT to do so. Even with all of the mishaps and weather-related misfortunes, the food was fresh, abundant, and packed with flavor. Except for the more proportionate tacos, Taqueria Diana’s dishes can be easily shared, or serve as more than one meal — Diana couldn’t finish her nachos, and although I didn’t take a picture of it, the Quesadilla Suiza looked like an explosion of meat and cheese to put a Taco Bell Crunchwrap to shame (yes, I’m going to try one when I go back). I’m telling you now I plan on returning, possibly by myself to make sure I get a seat at the bar. I know it’s far from authentic fare, but there’s a good chance you’ll find me at Taqueria Diana on September 16th, celebrating Mexican Independence Day as any patriotic American should — by diving mouth-first into that big ol’ melting pot.