(Welcome to the inaugural edition of Brief Bites, in which I attempt to highlight one or two dishes and keep my word count to slightly less than Dostoevsky-levels. We’ll see how it goes.)

My best friend in 3rd grade was a girl named Kathlien, who had moved to Larchmont from Belgium a few years before we met. At that point, I couldn’t have pointed  Belgium out to you on a map, let alone tell you what Belgians ate, but Kathlien and I shared a common love of boxball, Barbies, and eating as many Girl Scout cookies as we sold, so I was basically a shining example of youthful multiculturalism. Eventually her parents’ careers took the family back to Ghent, and Kathlien and I grew up and apart. Perhaps my early brush with Belgian culture left me predisposed to view the country positively, but even now I can’t help but view Belgium with a kind of reverence. After all, this is the nation that lays claim to my favorite kind of beer (Belgian strong ales like Delirium Tremens), amazing waffles, delicious cookies (Biscoff), Godiva chocolate, and freaking french fries. Oh yeah, and they have some neat art and stuff, too (Rubens’ Prometheus Bound, anyone?).

So while this seemingly Willy-Wonka-wonderland of my favorite foods lies far across the vast Atlantic, the best I can do for now is sampling a bit of Belgian bravura at the new brick and mortar location of Wafels and Dinges, down at the bottom of the East Village on 2nd and Avenue B. 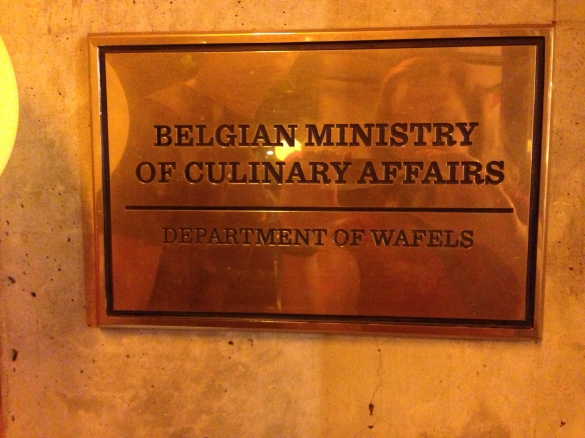 A very official plaque establishing Wafels and Dinges as missionaries of the gospel of Belgian desserts.

Wafels and Dinges, known for besting Bobby Flay in a Waffle (er, wafel?) Throwdown (the victorious wafel is now on the menu), and for tempting the hearts and stomachs of many a drunken NYU student with their truck parked almost nightly near Astor Place, has been roving NY for over half a decade in cart and truck form. Their first permanent store opened last month, conveniently just a few steps away from the owner Thomas DeGeest’s East Village apartment. The sizable cafe occupies the corner of the block, and the open and airy space features the same tongue-in-cheek whimsy of their portable locations (such as a plaque on the front wall declaring this the “Belgian Ministry of Culinary Affairs: Department of Wafels”). The outer walls are basically all windows that can be opened up to the air, and the interior is decorated in an industrial style that mimics the look of the food trucks — yellow and black painted metal, unfinished steel, antique waffle irons hanging along the walls. A glass-enclosed kitchen/bar area occupies the front half of the store, with a collection of tables and chairs in the back. We happened to visit at the tail end of National Waffle Day (too late to catch the crowning of Mr. and Mrs. Wafel, alas), but the cafe was still decked out in plenty of cute blackboard drawings and taped-up artwork proclaiming wafel devotion. Aside from their food and drink offerings, the Wafels and Dinges cafe sells merchandise and house-endorsed items like speculoos spread, maple syrup, cookies and imported Belgian products.

The inside of the cafe is decked out in the familiar colors of the W&D trucks and carts. Note the glass-enclosed kitchen/bar area, where you can watch some wafelcraft in action.

Vibrant displays of dinge devotion next to the Mr. and Mrs. Waffle scorecard.

The Wafels and Dinges cafe offers the same menu as found on their trucks, along with the shakes and sundaes, espresso drinks, and some savory wafels that are exclusive to the store (like the 2nd Street Salmon Special, which is like a bagel and lox platter, only on a waffle). Jacob and I decided to get a wafel (in honor of the holiday), and a milkshake to take advantage of the location’s offerings.

The variety of wafels — Brussels on top, then Liege, then mini wafelini, and the Quarte and Stroopwafels on the bottom row.

We selected the Liege Wafel with Nutella and sliced bananas. Wafels and Dinges offers two main types of waffles: the Brussels waffle, which looks more like the familiar dining hall/IHOP model and is rectangular and airy, and the Liege waffle, which is thicker, less uniform in shape, chewier and denser (kinda like if Eggo waffles were artisanally-crafted). After selecting your wafel type, you then get to pick what kind of “dinges”, or toppings (ranging from dulce de leche to plain butter to walnuts), you’d like on your wafel — the first for free, and the rest come at an additional cost.

All hail our Liege, Lord of the Nutella and bananas (everyone loves a bad feudalism joke, right?).

I’ve actually never had the Brussels wafel, since the Liege is just so good. Unsurprisingly, this classic W&D menu item lived up to expectations — just as satisfying as the first one I ordered from the truck. Really, you can’t go wrong with a killer combo like chocolate and bananas. The contrast of the cold, freshly sliced bananas against the warmer smooth Nutella, and the chewy, slightly caramelized wafel made each bite a complex mishmash of temperature and texture. The only improvement would have come from warming the wafel more, or serving it fresh from the iron. Wafels and Dinges makes the wafels in batches that can sit out for a bit, depending on how busy the cafe is. The quality of the wafel is still superb even at room temperature, with strong vanilla and brown sugar flavors present in the batter, but had it arrived piping hot, the Nutella would have melted a bit and helped to bring the dish together more firmly.

We opted to go full-on Belgian for the milkshake, choosing the Spekuloos Shake, which features  W&D’s homemade Spekuloos ice cream mixed with crushed speculoos cookies. It’s served in a glass coated with speculoos spread, and topped with whipped cream, more cookie crumbles and a sprig of mint). For the uninitiated, spekuloos (or speculoos) are a type of spiced Belgian cookies that are traditionally made for the Feast of St. Nicholas around Christmastime, but are today more commonly served on Delta flights, in the form of complimentary packets of Biscoff cookies. Frequently light in color and oval-shaped, speculoos cookies have a similar flavor to gingerbread, but without the earthy intensity of cloves. The rise of the Nutella-like Biscoff spread (speculoos cookies crushed to a peanut butter consistency) has pushed the cookies more into the mainstream spotlight, to the point that Trader Joe’s sells its own version, in both cookie and spread form. 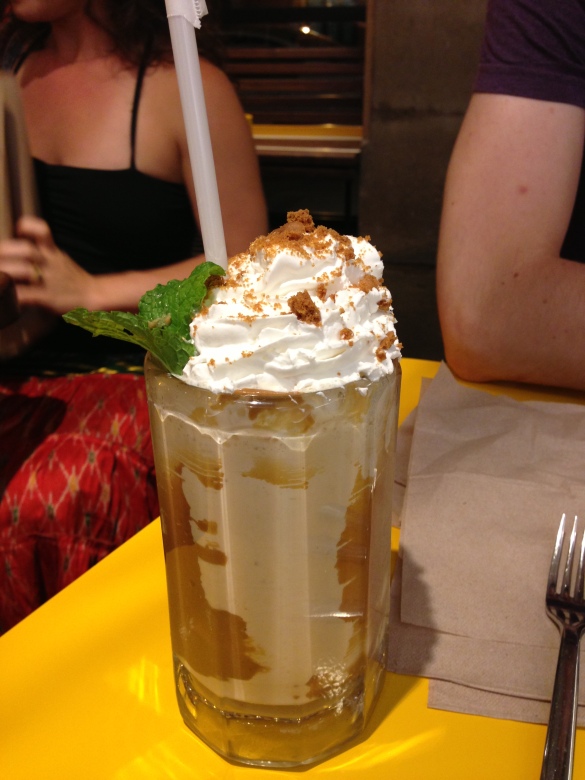 The Spekuloos Shake: an comely onslaught of sugary spice.

This shake is a triple punch of speculoos spice, so you’d better be a serious proponent of cookie butter allure if you opt to order it. Since we were splitting the shake, I didn’t find it too overwhelming, but if it were my sole dessert, I might have found it ultimately a little too one-note. Don’t get me wrong, I love me some Biscoff, and the ingredients were all top notch — the fresh creamy ice cream, the sweet spread, and the thick whipped cream — but it was a bit of a sugar bomb. Both Jacob and I felt that the drink was a bit too thin, more milky than truly slurp-able, like a great milkshake should be (at least, if you’re a Fribble lover like me). While I’m not opposed to the idea of speculoos-flavored milk, I think a mix-in or two would have simultaneously made the shake more interesting to drink, and broken up the intensity of the cookie flavoring. Wafels and Dinges actually offers another shake with Spekuloos ice cream and fresh strawberries, and I think having chunks of fruit in the milkshake would better allow the ice cream’s distinct flavor to shine. The mint garnish was also a source of confusion. Visually appealing, the bright green leaves certainly popped against the beige shake and white whipped cream, but once you started actually drinking, the mint seemed a bit out of place — what are you supposed to do with it? Chew small bites in between sips? Maybe it’s a consequence of watching too many episodes of Chopped, but I don’t see the point of inedible garnishes. Especially because I think a mint-speculoos shake sounds like a delicious and more refreshing dessert than the original version we had.

All in all, the Wafels and Dinges cafe is definitely a destination worth traveling for. Rather than scouring the city for the trucks or carts, you can find all the dessert delights you want at this new location, served daily with a solid dose of whimsy, even when it’s not National Waffle Day. While the milkshake didn’t blow us out of the water, the wafels are consistently superior to any other contenders I’ve encountered, and I’ll be back to try out their savory varieties, and maybe a sundae (the Speculoos Split with caramelized bananas is calling to me). Our server even remembered our names as Jacob and I headed out into the night, thanking us for stopping by, and making me wish I lived just a bit closer and could become a W&D regular. It may not be the most authentic Belgian experience, but until I find myself in Bruges, I’ll think fondly of Kathlien and her home country’s amazing cuisine as I take an extended tour through the Wafels and Dinges menu.