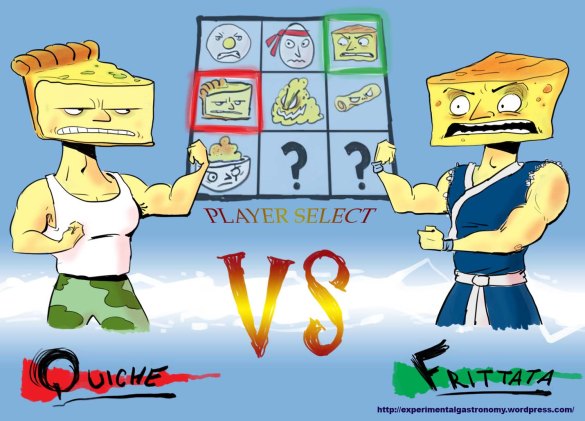 There can be only one. (All credit for awesome art to Jeff Call)

Hello, and welcome to the first post of Edible Inquiries! I know I’ve been MIA for a little bit, but while work and life kept me away from the blog, I’ve been trying to come up with ways to spice up Experimental Gastronomy’s content a bit. So here I am introducing a brand new series — Edible Inquiries, where I take readers’ questions about food and try my best to research the answer. That’s right, I’ll scour the web and bring together questionable sources, in the name of food trivia and the possibility that some of this information might actually be verifiable. Maybe I’ll even crack a book or two. So please feel free to comment on the post, hit me up on facebook (https://www.facebook.com/experimentalgastronomyblog), or tweet me with your random queries (@MaggBo). I’ll still be doing restaurant and Oreo-related reviews, but hopefully Edible Inquiries can become a permanent addition to the roster at EG.

The opening volley came from my friend Stephen, who asked the age-old question — “what is the difference between a quiche and a frittata?”

Well, if we’re judging a book by it’s cover, the simple answer appears to be that a quiche has a crust, while a frittata does not. But don’t be so easily swayed, my friends — a trip into the history of each dish reveals disparities beyond what lies at the bottom of the plate.

Quiche (most notably, Quiche Lorraine) is generally considered a quintessentially French food, but its roots can be traced back to the German word “kuchen,” meaning “cake” (Wise Geek). As the name would imply, Quiche Lorraine originates from the border region of Alsace-Lorraine, which fellow Regents Global History alums will remember has traded hands between Germany and France many times. This frequent exchange of rulers meant that the now French region’s cuisine has major influence from German cooking (for example, it’s not uncommon to find sauerkraut and beer involved in Alsatian dishes) (France Property and Information).

The first Quiche Lorraine was supposedly concocted in the German medieval kingdom of Lothringen (to be later renamed Lorraine when the French took back the region) (Food Reference). According to some sources, Charles III, Duke of Lorraine in the 16th century, regularly ate the dish, although the first print evidence of it doesn’t appear until the 19th Century, in Linnois’s l’Histoire de Nancy, where it is referred to as a seminal French dish (The French Training Site).

The Ur-Quiche Lorraine was composed of ingredients that would be at the ready on a typical medieval French farm — eggs, cream, smoked chopped bacon or ham, and a crust made of bread dough (French training site). Eventually the bread dough was replaced by pate brisee (short crust pastry) or the pie crust we encounter today. Other variations like the addition of cheese, onions, and other types of meat came later. The dish crossed the Atlantic thanks to the great Julia Child, assuming its rank in American brunch in the 1970s, although in France it is generally served as an appetizer for lunch or dinner (Wise Geek).

Although in America we place our egg dishes on equal footing, the frittata has a comparatively lowly position in its native Italy than its courtly French cousin. According to DeLallo, the frittata is part of “cucina povera,” or humble, home-cooked food. Its name comes from the verb “to fry” or “friggere,” and is basically a kitchen-sink dish used in Italian households to use up leftovers. There’s an Italian phrase ““hai fatto una frittata,” which loosely translates to “you’ve made a mess,” suggesting that accuracy and delicacy are not top priorities when cooking a frittata.

Since eggs were readily available for most people in Italy, there’s no one particular recipe for the original frittata. Some historians speculate that the earliest omelet-esque dishes may be from the Fertile Crescent, eventually spreading throughout Europe and North Africa (History of the Frittata), although others argue that frittatas predate the French omelet, arriving around the same time as the Spanish tortilla (not to be confused with the Mexican bread, a Spanish tortilla is pretty much the same as a frittata, except built around a filling of sliced potatoes) (Wise Geek). What separates the omelet from the frittata is largely the timing of the mix-in components — in an omelet, the eggs are cooked through, then the additional ingredients are placed in the middle and the omelet is folder over to cover them. In a frittata, the other ingredients are tossed in while the raw eggs are beaten, so they are dispersed throughout the dish. Traditional Italian frittatas contain “Italian sausage or ham, sweet peppers, fontina cheese, garlic, onions, salt, pepper and nutmeg” (Wise Geek). Another major difference is that, like a quiche, the frittata is eventually baked, then cut into individual slices for serving, either hot or cold (Wikipedia).

So in many ways, the quiche and the frittata are strikingly similar. Both arose from common ingredients found in agrarian European households, both are intended to be sliced and eaten by multiple diners, both are open to plenty of mix-in interpretation, and both require at least some time in the oven. But although the crust may appear to be the defining difference, the true distinction between the two dishes lies in the filling. Quiches must be made out of a custard, which comes from the incorporation of some sort of dairy with eggs (traditionally heavy cream). A true frittata is prepared just with eggs as the base, making it lighter than its decadent French relative (Reluctant Gourmet).

Cut to the Chase, Lady!: Quiches are a richer French dish defined by the use of a custard (dairy + egg) base, with an optional crust, while Frittatas are Italian and have just a plain base of eggs. While quiches were served to royalty, Frittatas were a “leftover” meal home cooks threw together.

So there you have it, Stephen. In America, of course, we’ve basically removed all the class connotations with regards to our egg entrees, except the weird implication that quiche is an “unmanly dish” (thanks to the 80s bestseller Real Men Don’t Eat Quiche). Next time you’re looking over a brunch menu, decide if you’re feeling particularly lactose-inclined before ordering. Regardless of what you pick, quiche or frittata, you’re basically eating a piece of history.